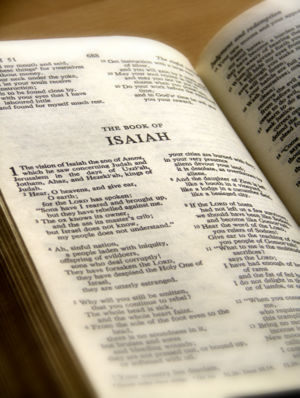 Happy birthday Rebecca! 24 is such a nice perfect number… And I’m 42. (Numbers can be cool as long as you’re just looking at them, not trying to add them or anything.)

For the last two weeks, we’ve been taking progressively closer looks at Scripture passages, with a survey/ overview (a fly-over) and last week with a drive-by. This week we’ll try a walkabout. (I don’t know if it was the Australian VBS or if just craving Outback Steakhouse…)

This morning I read some in Isaiah, so I’ll use that as an example. Chapter 38 tells the story of Hezekiah’s terminal illness, his appeal to God, God’s answer and Hezekiah’s praise for healing. It’s mostly a straightforward narrative account, with a little poetry. The tricky thing, though is that the last two verses give you the reasons for the rest of the action. Verse 21 explains when the healing happened and Isaiah’s role in it, and verse 22 tells how Hezekiah knew he would be healed.

Now that we have our background, let’s start that closer inspection.

Sections – Are there natural divisions? We have four in our chapter. The Psalms often have one or two sections, sometimes more. In many of the Gospels’ chapters, there are several short accounts or stories. Paul will hit on a few different topics in the chapters in his epistles.

Who, What, Where etc – There are two main people, Hezekiah and Isaiah, besides God acting. God intervenes with 2 miracles. The healing and the sundial moving backwards.

Lists – (One of my favorites.) Look for series of things. I usually number them right in the text. In God’s answer (vv. 5-9), He lists three things He’s going to do for Hezekiah. 1. Add to his days 2. Deliver him and Jerusalem from the Assyrian threat 3. Defend Jerusalem.

Eye-catchers – Sometimes, things just grab your attention. (Think there’s a reason for that? Absolutely!) Maybe it’s something you never knew. Many times, it’s a fresh take on something familiar. I had two. When the prophet tells the king to get his house in order, what does Hezekiah ask God for? Not healing, like you’d expect. He simply asks that God remember how he has walked in obedience with a loyal heart. The second one was verse 17. “Indeed it was for my own peace that I had great bitterness; but You have lovingly delivered my soul from the pit of corruption, for You have cast all my sins behind Your back.” At first, it was kind of jarring to think that bitterness produces peace, but this is the king’s testimony of what good came from this experience, how God redeemed the situation. Also, don’t you love that God throws our sins behind His back. He doesn’t look at them any more.
Next week we’ll squeeze what we can out of verse 17 for a super-close, rabbit-chasing study.

From the opening pages of Scripture, no one who has encountered a holy God has come away unchanged. Adam, Abraham, Hagar, Moses and many, many others realized that God is not distant but a God who … END_OF_DOCUMENT_TOKEN_TO_BE_REPLACED

A covenant is a solemn, binding agreement. God chose to unilaterally enter into a covenant with Abraham. No matter what Abraham said or did, God vowed to uphold the terms and bless Abraham. Marriage … END_OF_DOCUMENT_TOKEN_TO_BE_REPLACED

Jesus told a parable about a wise builder and a foolish one, underscoring how important it is to have a solid foundation. He declared that obedience to His word was the surest foundation of all. In … END_OF_DOCUMENT_TOKEN_TO_BE_REPLACED