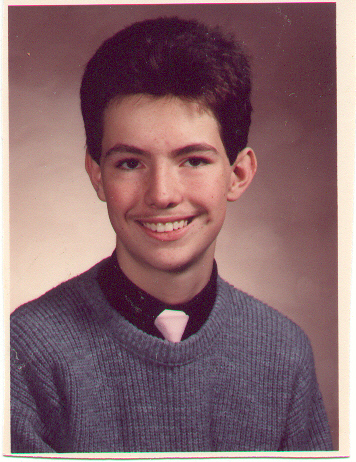 Yesterday my brother would have turned 40. Instead, fourteen years ago today, Jeff died at age twenty-six after a cardiac arrest. He was in the hospital for three days while we waited for God to perform a miracle that never came. Instead God chose to come alongside us, and save the healing for heaven.
I have a hard time trying to imagine him at 40. Fourteen is a lot easier. He was fourteen when my sister was born. I was eighteen then.
We shared a childhood, something that connected us in a unique way. I have a character in an upcoming book dealing with the loss of his brother and I put my words in his mouth. "I feel like I've lost some of my childhood," he said. It's a unique aloneness.
He was far from perfect, (aren't we all) but I catch glimpses of him in my son's sense of humor, and love of video games and all things Star Wars and Godzilla.
I think of him in the mornings when I take that pill to correct the arrhythmia we discovered not long after my fortieth birthday. Because of him, we knew to check for it.
I remember him when I write my son's name. Alan's middle name is Jeffrey.
Certain songs, movies, even cartoons and comic books characters will trigger a flash of remembrance.
Every year, on September 21 and 22, those memories are a little stronger, but with a little extra sting.

From the opening pages of Scripture, no one who has encountered a holy God has come away unchanged. Adam, Abraham, Hagar, Moses and many, many others realized that God is not distant but a God who … END_OF_DOCUMENT_TOKEN_TO_BE_REPLACED

A covenant is a solemn, binding agreement. God chose to unilaterally enter into a covenant with Abraham. No matter what Abraham said or did, God vowed to uphold the terms and bless Abraham. Marriage … END_OF_DOCUMENT_TOKEN_TO_BE_REPLACED

Jesus told a parable about a wise builder and a foolish one, underscoring how important it is to have a solid foundation. He declared that obedience to His word was the surest foundation of all. In … END_OF_DOCUMENT_TOKEN_TO_BE_REPLACED