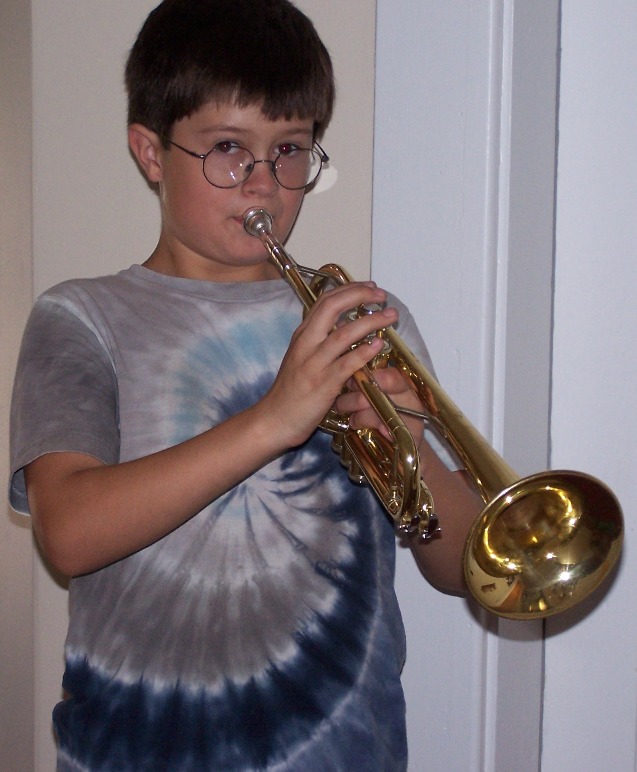 My son is a trumpet player now. Since September. Early out he asked me to track down an easy trumpet hymn book so he could play in church. (Something simple and light like Beethoven's Ode to Joy.)
I love that.
He never worried that we have other, more skilled musicians in the church. He wasn't intimidated at the prospect of making a mistake. The extra practice wasn't even a burden.
He had a gift and he wanted to offer it. Willingly.
Most times we go to a worship service because of what we expect to get out of it. We hope to be uplifted by the music, challenged by the teaching or encouraged by the words spoken. Or maybe all three. Being uplifted, challenged and encouraged are all good things. But they aren't the point of worship. Worship is more about what I can give. What offerings, what sacrifices do I bring? How do I demonstrate to God my Father that He is worthy? Not whether or not I'm worthy, but whether He is.
What will you bring to worship this weekend? Your voice? Your prepared heart and mind? Your tithes? What else?
I know a boy who's bringing a trumpet. 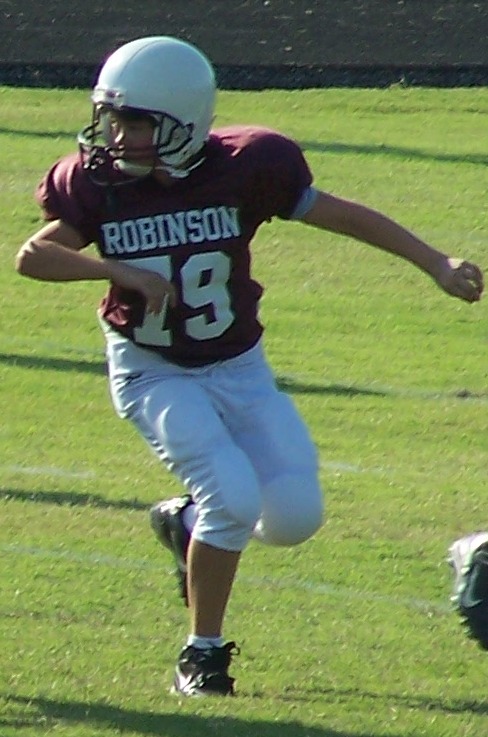 Last week, my son got moved from his spot on the kickoff team. The possibility that he would spend the entire game on the sidelines loomed. He was crushed. He said, "What have I done to make God so angry that He would do this to me?"
Wow.
His sensitivity astounds me, but he makes a fundamental error that many of us make. He assumes God MUST be angry, MUST be punishing him because something bad happened. He might be, but that's not always what's going on. As we tried to work through this, I asked him what else God might be doing.
His first answer – protecting me. Sometimes a setback serves to protect us. The thing is, because it works, we'll never really know what it was or how effective the protection was. At least not in this life.
His second answer – teaching me. Times of disappointment teach us more about ourselves and more about God than the good times ever could.
His third answer – making me stronger. It's a lot like teaching. Difficulties make us stronger.
His last answer – I don't know. Sometimes hard times have some other purpose behind them. Job never knew what purpose his trials served. Granted the scale is much different, but Alan may never know why he was moved off the kickoff team.
I told him in some ways, it's like his vaccines. When he was a baby, he couldn't understand why they were necessary. He only knew I let him hurt. Because I couldn't explain it, all I could do was comfort him until the hurting stopped. Now that he's more mature, he knows why he had to get the vaccines. For some reason we don't understand now, God let him go through this hurt. We may understand it later, but we can be sure God's ready to hold him close until the hurt goes away.
So Sunday night at church… he sang "Blessed Be Your Name".
There's a thing or two I hope he does know – what he's made of, how proud we are, and how much God, his Daddy, delights in him. Because He does.

Yesterday, my kids and I headed out to lunch at our favorite BBQ place, and my son ordered a catfish sandwich.
Okay, let me back up and tell you why that statement is huge. One, we were going out to eat for lunch (not at McDonalds) on a weekday. My husband is out of town this week, so it was just us. Second, and this is the big one, Alan has never had a catfish sandwich in his life. The boy who will eat cupcakes but not cake… go figure… ordered something completely off the wall. And he lived.
I suspect it has to do with his goal of becoming an extreme fisherman, like Jeremy Wade of River Monsters. If he's gonna catch these monster catfish, he should learn to eat them. But whatever his motivation, he took an amazing risk and broke out of his routine.
I am very much a creature of habit. I like the smooth predictability of routines. They allow my brain to go on autopilot, freeing up precious mental resources for other things. But I also find that routines can be boring, and can numb me. Especially in worship.
Paul says, "Never be lacking in zeal, but keep your spiritual fervor, serving the Lord." (Romans 12:11 NIV)
In the sentence, zeal equals spiritual fervor. It is a passionate pursuit. Next week as we break out of our worship routines for VBS, I could use a little of that fervor restoration.
How do you know you're in a routine in worship? How do you shake things up?

When my nephew got married, Alan was just shy of his 5th birthday, and the wedding reception was the biggest, best party he had ever been to. He loved the music, and danced with complete abandon. Five-year-old boys do just about everything with complete abandon. Of course it's all on video, and you can hear Alan say, "Watch me, Dad!" I love that. He didn't care what anyone around him was doing. He didn't care if he was doing all the 'right' steps. His dad was there watching, and that was all that mattered.

Alan taught me a lesson about worship that evening that I still need to grasp completely.
God wants me to enjoy His presence with that same joyful abandon.
Just like Jon brought us to the wedding reception for the purpose of celebrating, God will bring me aside with Him to celebrate. (Isn't that what worship is? Not all formal, stiff and lifeless.) I'm usually much more like the other Wiseman men at the reception, off to the side, hands in my pockets, missing the opportunity. I'm way too self-conscious, way too concerned with how things might look to everyone else. But if my Dad is watching and smiling, what else really matters?
The wedding reception only lasted a few hours, and then it was back to our regular routine. There's a day coming, though, when the wedding reception never ends, and I'll be there, not just with my Dad, but with the Bridegroom Himself.
(This is an encore post.) 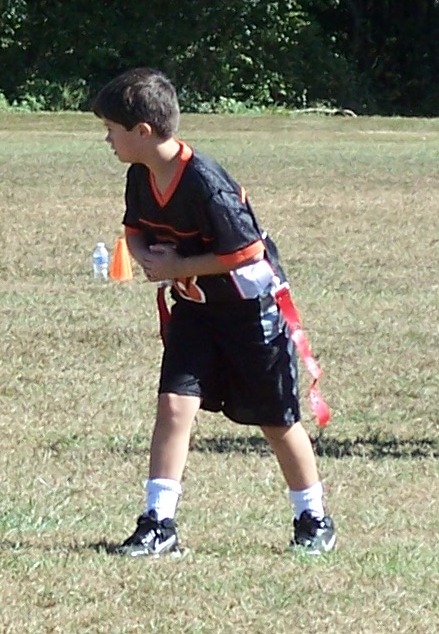 Today I'm taking a break from my regular Monday Meditations to wish my son a happy 10th birthday- double digits, it's big time.

I love his sense of humor, his limitless imagination, and his tender heart. He has an ever-growing sensitivity to the things of God, and is ready for the challenge of becoming a godly young man.

I've learned so much from getting to his mom- starting with the 153 insulin shots I learned to give myself while I carried him. He's taught me patience *ahem*, grace, compassion, and the appreciation of a good riddle.

I've introduced him to Godzilla, Legos and the joy that comes from the long camera pan of the losing team's bench. (It's even better when the losing team is from anywhere in North Carolina, but that's another story.)

In some ancient cultures, boys stayed with their mothers until they were 7, and then it was the father's responsibility to make them men. Thankfully, our culture doesn't work that way, and I'm not out of a job yet.

Today, I pray a special blessing on him, and on all mothers of sons. What a privilege to be part of his life, to have a hand in shaping him!

A few evenings ago, I was snoozing through whatever non-Disney Channel show happened to be on, when I heard rustling… and struggling… and fussing. The sounds of utter frustration. So I blinked myself awake enough to follow the sounds and found my son's sheets stripped from his bed, new sheets in a wad, and Alan had had enough. He tried and tried and tried and he could NOT get the fitted sheet on that bed.

While I could discuss the miracle of a 9 year old boy changing his own bedsheets, I want to focus on his aggravation.

I saw myself in Alan's struggle. How many times do I wrestle with a problem, growing more frustrated, more discouraged all the time when help is readily available. I have a great High Priest who sympathizes with my situation, whatever it is.

That's where I fail. I set a false standard for what I 'should' be able to handle, and what is an acceptable difficulty level to warrant reinforcements. I stubbornly refuse to ask, determined to handle things myself. That's stupid.

I don't have to struggle. I just have to ask.

From the opening pages of Scripture, no one who has encountered a holy God has come away unchanged. Adam, Abraham, Hagar, Moses and many, many others realized that God is not distant but a God who … END_OF_DOCUMENT_TOKEN_TO_BE_REPLACED

A covenant is a solemn, binding agreement. God chose to unilaterally enter into a covenant with Abraham. No matter what Abraham said or did, God vowed to uphold the terms and bless Abraham. Marriage … END_OF_DOCUMENT_TOKEN_TO_BE_REPLACED

Jesus told a parable about a wise builder and a foolish one, underscoring how important it is to have a solid foundation. He declared that obedience to His word was the surest foundation of all. In … END_OF_DOCUMENT_TOKEN_TO_BE_REPLACED