Posts that reference the book of Ezra 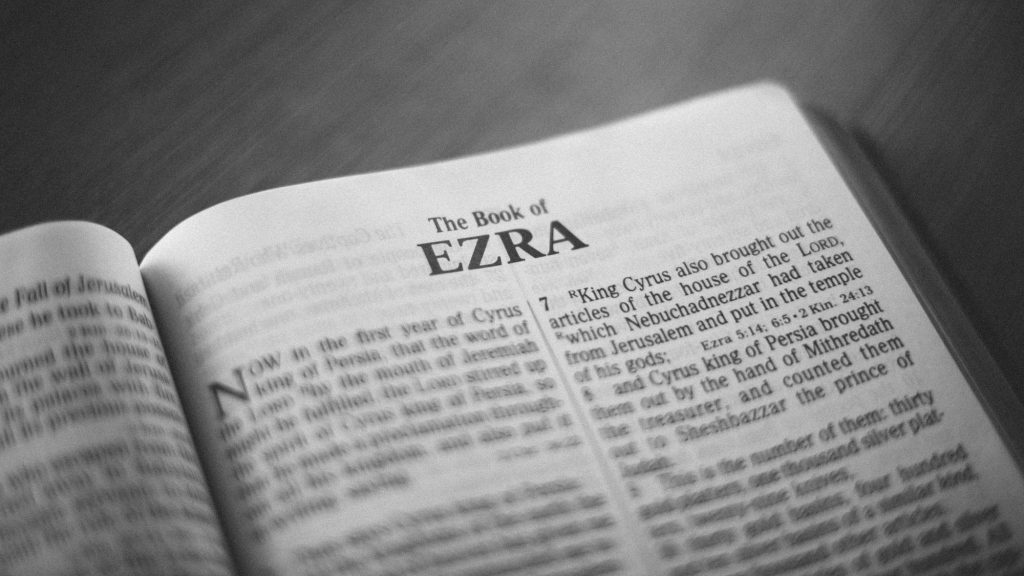 Intercession is going to God on someone’s behalf. It a holy privilege and duty, not to be taken lightly. It is strenuous and it can be messy. But it is one of the greatest ways we can minister and show love to others. We have learned from Nehemiah and his BURDEN for others, and from Daniel and his IDENTIFICATION with those for whom he was interceding. Elijah modeled how to pray for those who are sick, and Hezekiah showed us how to pray when trouble comes. Today we’ll look to Ezra and learn a less popular prayer – for sin and sinners.

Ezra was a priest who had returned to Judah with a group sent to repatriate the land after seventy years of Babylonian captivity. It isn’t long before some situations come to Ezra’s attention. These situations put the people on the very same track that landed them in captivity- not remaining pure, flirting with idolatry, intermarriage with pagans and so forth. As a good, conscientious, caring priest Ezra intercedes for the people. His prayer is recorded in Ezra 9:6-15.

Mourning for sin precedes the prayer. In verses 3-5, look at how Ezra responds to the news that his people are falling into the same trap of sin. He tore his clothes. He pulled his hair out. He pulled out his beard. He sat down dumbfounded the rest of the day. He didn’t eat or anything else. And in verse 4, he had influence on others, who also mourned the sins reported.

Do we mourn sin? That is, do we mourn the assault on God’s holiness? Or are we more likely to excuse it, to minimize it? “We’re still in a sinful body so we can’t really stop it from happening.” Or perhaps mourn the consequences we face because of our sin? Or do we use the sin of others to self-righteously feel better about ourselves? Let’s be like “all who trembled at the words of the God of Israel” and follow Ezra’s example of mourning for sin.

Ezra identifies with his people. Daniel did this too. Ezra doesn’t claim to be sinless. “O my God, I am ashamed and blush to lift my face to you,” Ezra 9:6. Nor does he whitewash what his people have done in the past. “From the days of our fathers to this day we have been in great guilt. And for our iniquities we, our kings, and our priests have been given into the hand of the kings of the lands, to the sword, to captivity, to plundering, and to utter shame, as it is today.” Ezra 9:7 He very plainly confesses the sin. “For we have forsaken your commandments, … do not give your daughters to their sons, neither take their daughters for your sons, and never seek their peace or prosperity. Ezra 9:10, 12.

Ezra leaves the outcome in God’s hands. He doesn’t make demands on God’s mercy. In verse 14, Ezra says, “Would you not be angry with us until you consumed us, so that there should be no remnant, nor any to escape?” Ezra 9:14. Rather, Ezra trusts God’s grace since he was able even to approach God with this petition. “O LORD, the God of Israel, you are just, … Behold, we are before you in our guilt, for none can stand before you because of this.” Ezra 9:15

When we begin to understand sin, we abandon any notion of pride or rights. But we also begin to glimpse what a wonder the grace of Almighty God is.

As believers in Christ, a kingdom of priests, let us see interceding for sin, for ourselves or others, as an urgent duty. Let us seek the recognition of God’s holiness and let us have faith in His ability and timing to bring punishment and restoration.

For Ezra had prepared his heart to seek the Law of the LORD, and to do it, and to teach statutes and ordinances in Israel. Ez. 7:10

According to the ancient rabbis, if Moses had not been given the Law, God would have given it to Ezra because of his worthiness. Why was he held in such high esteem?

He had prepared his heart – It’s a Hebrew idiom that means he had completely committed himself to God.

To seek the Law – He was energetically devoted to understanding God’s word.

To do it – He didn’t just want academic knowledge of Scripture. He practiced it. The things he studied were life-impacting, life-changing.

To teach it – Ezra modeled God’s ways to those around him. He was a man of integrity whose lifestyle matched his words, which were rooted in his pursuit of God.
How would our lives, our families, our churches change … if we were more like Ezra?

Ezra continues the history of Israel, picking up after seventy years in Babylonian captivity. We see them take their first steps toward reclaiming their nation and their place as God's chosen people. As you can imagine, things are a little shaky. This generation doesn't know much more about living as God's people than that first generation of Israelites who left Egypt. In fact, there are a lot of similarities between the two. Just like in Exodus, we find:

And like Exodus there are occasional lengthy passages of genealogies or other details.

Some things to watch for as you read:
Watch how God sovereignly directs all the events. The phrase "the hand of the Lord" is used a few times. We'll see it again in Nehemiah.
Notice the problems caused by compromise.
List Ezra's character traits. These are summarized in 7:10.
How are the principles in Ezra relevant to us?

(This is an encore presentation of one of my earliest tips.)

Are you a list-maker? Why do you make them? To remember things, right? Today’s tip is learn to recognize lists in Scripture.
Some of the lists you’re already familiar with- Ten Commandments, Fruit of the Spirit and so forth. Sometimes though, they are a little more subtle. For example:
One of my favorite lists is in Ephesians 1:3-6. Check out the blessings in those few verses!
“Blessed be the God and Father of our Lord Jesus Christ, who has blessed us with every spiritual blessing in the heavenly places in Christ, just as He chose us in Him before the foundation of the world, that we should be holy and without blame before Him in love, having predestined us to adoption as sons by Jesus Christ to Himself, according to the good pleasure of His will, to the praise of the glory of His grace, by which He made us accepted in the Beloved.”
Now we could dicker about exactly how many things should or could be on the list. For example, ‘holy” and ‘blameless’ could be two separate items, but no matter how you cut it, that’s a pretty fantastic list.
There’s another in Romans 5:1-11. Check out all that ‘we’ have, what ‘we’ were and what ‘we’ are now.
Noticing or even writing down the lists causes us to slow down and consider the truth for an extra moment or two. I number the list items in the text or write them in the margin.
As you study, watch for lists in Scripture, and spend some time with them. I’d love to hear what lists you discover.

After checking Ezra's and Daniel's Bible study examples, this week we'll look at the model for kings.

In Deuteronomy, in some of Moses' final teachings to Israel, he gives the standard for future kings of Israel.

Also it shall be, when [the king] sits on the throne of his kingdom, that he shall write for himself a copy of this law in a book, from the one before the priests, the Levites. And it shall be with him, and he shall read it all the days of his life, that he may learn to fear the Lord his God and be careful to observe all the words of this law and these statutes, that his heart may not be lifted above his brethren, that he may not turn aside from the commandment to the right hand or to the left, and that he may prolong his days in his kingdom, he and his children in the midst of Israel. Deuteronomy 17:18-20

Did you catch those details?
1. Write out a copy – longhand.
2. Keep it close.
3. Read it every single day

Moses then lists several reasons and benefits for the king if he follows this program.
1. He'll learn to fear God
2. He'll be careful to obey it God's laws. If he knows the law by heart, he won't deviate from it.
3. He won't think he's better than his subjects.
4. His reign will be extended, and his children will succeed him.

Do you think the model is still valid?

Ezra 7:10 presents a progression we can follow in our Bible study. It reads, "Ezra had prepared his heart to seek the law of the Lord, and to do it, and to teach statutes and ordinances in Israel." Did you catch the steps?
1. Prepare your heart- Sins dealt with. Prayers offered. Distractions removed.
2. Seek the Law- Energy and effort applied to understanding God's word.
3. Do it- Precepts practiced/ obeyed with diligence.
4. Teach it- Truth modeled and/ or proclaimed.
In most of the tips, I admit, I focus on step 2, but if we skip the preparation, we treat God's message to us as just another book. If we go no further than studying, we might as well be learning Spanish or algebra or biology. And, while God intends for us to obey His Word, if we do that as loners, without sharing what we learn, we fail to fulfill our commission.
Bible study isn't an end unto itself. It's a key component in helping us grow in our relationship with God and with others.
How do you view Bible study? A chore. An obligation. A time-waster. A privilege. A duty. A necessity. A habit.
Do you follow these steps? (They were pretty convicting to me, too.)

From the opening pages of Scripture, no one who has encountered a holy God has come away unchanged. Adam, Abraham, Hagar, Moses and many, many others realized that God is not distant but a God who … END_OF_DOCUMENT_TOKEN_TO_BE_REPLACED

A covenant is a solemn, binding agreement. God chose to unilaterally enter into a covenant with Abraham. No matter what Abraham said or did, God vowed to uphold the terms and bless Abraham. Marriage … END_OF_DOCUMENT_TOKEN_TO_BE_REPLACED

Jesus told a parable about a wise builder and a foolish one, underscoring how important it is to have a solid foundation. He declared that obedience to His word was the surest foundation of all. In … END_OF_DOCUMENT_TOKEN_TO_BE_REPLACED