Posts that reference the book of Malachi 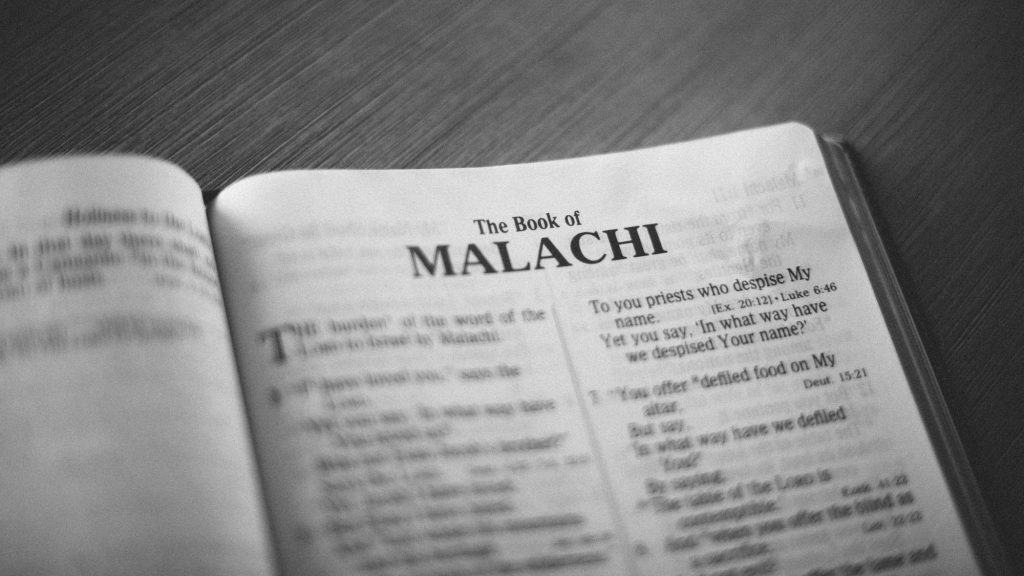 And he said to man, ‘Behold, the fear of the Lord, that is wisdom, and to turn away from evil is understanding.’ Job 28:28

Fear.
The Hebrew is yirah.
But it’s not like I’m afraid of spiders.
It’s like fear of the Lord.
Reverence. Respect. Recognition of His worthiness.

It is the reasonable response to God. May we offer the fear He is due.

“Behold, I will send you Elijah the prophet before the great and awesome day of the LORD comes. And he will turn the hearts of fathers to their children and the hearts of children to their fathers, lest I come and strike the land with a decree of utter destruction.” (Malachi 4:5-6)

These were the last words in the Old Testament.
Then for 400 years, God was silent.

When He spoke again, Gabriel said these words to Zacharias:

He will turn many of the children of Israel to the Lord their God. And he will go before him in the spirit and power of Elijah, to turn the hearts of fathers to their children, and the disobedient to the understanding of the righteous, to make ready for the Lord a prepared people.” (Luke 1:16-17)

Before the Advent comes the preparation.

How do we prepare?
Do we realize the importance of right relationships with those closest to us?
Do we understand that righteousness is the best course of action, that God lays out His standards because they are good for us?
Are we ready to receive Him?

Christmas is several days away. The coming of Christ in power and glory is in the future.
But Advent is now.
Are we prepared?

Read what God says about the Levites, the ones He chose to serve Him as priests.
The law of truth was in his mouth, and injustice was not found on his lips. He walked with Me in peace and equity, and turned many away from iniquity. Malachi 2:6

As believers, we have become part of a royal priesthood.
How do we measure up?

Is the law of truth in our mouths?
Do we know it?
Does it guide our thoughts, our speech, our actions?

Is injustice found on our lips?
Are we self-seeking?
Do we show partiality?

Do we walk with God…?
Do we seek Him in our goal-setting and decision-making?
Do we enjoy close communion and fellowship?

…In peace and equity?
Are we peaceful and gentle toward everyone?
Do we promote honesty and integrity?

What would God say about our conduct as priests?

Wow, these last couple of weeks have been something else. Windows 10 problems, Microsoft Office problems, internet issues, power outages … and traveling. I think everything is lined out, updated, properly configured, and squared away at last! Oh, and for the record, I have a privacy policy update too.

We are under a winter storm watch. It was 65 degrees yesterday, but the temperature is expected to drop at least forty degrees today as the frontal system moves in bringing freezing rain, sleet and snow.

There are few things that get our household as giddy as the possibility – no matter how slight – of a snow day. What a sweet unexpected luxury of going back to bed, of pajamas, not to mention, cinnamon rolls. We will light the snow candle and I will spend the afternoon comparing weather reports, latching on to the most dire of the lot, as one to three inches, becomes three to five, becomes five to eight.

The buzz generated by a little snow in the forecast is nothing compared to the anticipation in the hearts of God’s people some two thousand years ago. They knew the words Malachi had spoken 400 years earlier. “‘But to you who fear My name the Sun of Righteousness shall arise with healing in His wings; and you shall go out and grow fat like stall-fed calves. You shall trample the wicked, for they shall be ashes under the soles of your feet on the day that I do this,’ says the Lord of hosts.” (Malachi 4:2-3) God said those words. He said He would send Elijah the prophet. Then for four hundred years, He said nothing.

The United States hasn’t even been a country for 400 years. We can’t comprehend not hearing from God for 400 years. But then He broke the silence. When Gabriel recited the words of Malachi back to Zacharias, he knew exactly what the messenger meant. It was time. The anticipation was giving way to reality.

Two thousand years ago, Jesus said, “Behold I am coming quickly.” There will come a day when the anticipation once again gives way to reality, and to fulfillment. The amazing promises God kept at the birth of Christ are just a glimpse. In fact, “Eye has not seen, nor ear heard, nor have entered into the heart of man the things which God has prepared for those who love Him.” (2 Corinthians 2:9) The best is still to come.

Malachi marks the last prophetic word from God for four hundred years, until John the Baptist burst on the scene, proclaiming the kingdom of heaven was at hand. The remnant who returned from Babylon had been back in the land around a hundred years, but they had settled into an empty ritualistic religion rather than embracing a relationship with their covenant God. God raised up Malachi to tell them in no uncertain terms that they had learned nothing from the captivity and if things didn't change, judgment would fall yet again. It's a harsh message to have hanging over them for 400 years. In spite of that, Malachi is straightforward, readable, and has just a twinge of sarcasm. It's one of my favorite of the minor prophets.
As you read the four short chapters, look for the questions and answers. Sometimes God asks, and sometimes Malachi. These form the framework of the letter. Note the speaker and the response. What is the tone? Are God's accusations justified? Do the people have a valid response?
One key word is covenant. What does God say about His covenant?
BONUS: Knowing that marriage is a covenant, what parallels do you see between God's relationship to the people and the number of divorces among the priests? In other words, have the people treated God, the way the priests have treated their Jewish wives?
What are the major sins the Malachi calls the people out for? What judgments does God pronounce? (Also note to what specific group those judgments are directed.)
Finally, like many of the prophets, Malachi looks forward to a coming day. What does he says about that day? What will happen?
Malachi hits home because of the self-righteous justification the people respond with when God confronts them with their sins. When I evaluate my walk, I need to make sure I'm using God's standards and not my own, and that I don't pass off the warnings. Otherwise, it's kind of like sitting through a blistering sermon then telling the preacher on the way out, "Boy, you really gave it to THEM today."
Next week- Back to the New Testament with a tip on 1 John.

From the opening pages of Scripture, no one who has encountered a holy God has come away unchanged. Adam, Abraham, Hagar, Moses and many, many others realized that God is not distant but a God who … END_OF_DOCUMENT_TOKEN_TO_BE_REPLACED

A covenant is a solemn, binding agreement. God chose to unilaterally enter into a covenant with Abraham. No matter what Abraham said or did, God vowed to uphold the terms and bless Abraham. Marriage … END_OF_DOCUMENT_TOKEN_TO_BE_REPLACED

Jesus told a parable about a wise builder and a foolish one, underscoring how important it is to have a solid foundation. He declared that obedience to His word was the surest foundation of all. In … END_OF_DOCUMENT_TOKEN_TO_BE_REPLACED